Electric cooperative R&D projects were established to install and monitor small wind and solar (less than 25 kilowatts) systems and share the performance data on-line with students, interested cooperative members, and the general public. Projects include a wind turbine at Indian Lake High School in Logan County and a solar panel at Butler Rural Electric Cooperative in Oxford.

Two Biogas generation projects came on line in the fall of 2008. Buckeye Power contracted to purchase all the output from the Bridgewater Dairy (1.2 megawatts) and Wenning Poultry (1.8 megawatts) manure-to-methane digester systems, the first of their kind in the state. 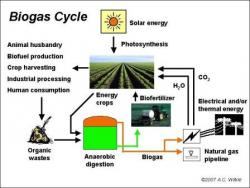 These large-scale agricultural operations constructed anaerobic manure digesters to accept the waste produced by their cows and laying hens. Bacteria break down the manure and produce methane gas, which is captured and used to run engine-and-generator sets. Interconnects provided by Midwest and North Western electric cooperatives allow the renewable energy to flow to Buckeye Power. The farm operators have solved the problem of what to do with tons of animal waste, and they have a new revenue stream from power sales. In addition, the residue from the digesters is a sterile organic fertilizer that may be sold in bulk for application on fields, pastures, and gardens.

One of the oldest and most reliable forms of non-combustion generation is hydroelectric power. Using the motive force of a river flowing through dams, hydroelectric power is produced as water turns turbines to energize generators. Buckeye Power has a 55-megawatt entitlement to hydroelectric power from the New York Power Authority, the largest state-owned power organization in the nation and a non-profit provider of electricity to electric cooperatives, community-owned electric systems, companies, and private utilities. This power is primarily from the Niagara (90 percent) and the St. Lawrence rivers.

For just $2 per month you can help your cooperative invest in a renewable energy future.

EnviroWatts is a green power program for Ohio’s electric cooperative members that lets you support production of electricity from renewable sources.

But renewable sources are not a substitute for what is known as base load generation. Renewable power may not produce electricity on a continual basis, but rather on an intermittent basis, as is the case with wind power. It takes a combination of resources to adequately address our energy needs.

Electricity is available at the flick of a switch. It helps power our lives in many ways.

That’s why it’s important we use energy efficiently — insulating our homes, sealing cracks and holes where air escapes, and replacing inefficient appliances with energy saving ones.

Energy is vital to our country and the world. We must not waste it, regardless of its source. Our future depends on this.

EnviroWatts, when paired with a complete home energy audit to maximize energy efficiency, is a terrific way to invest in our energy future while getting the most out of today’s forms of electricity generation.

The future of energy production is changing, with an increased focus on incorporating renewable sources.

But not everyone has the money, resources or ability to install a wind generator in their back yard or solar panels to their roof. EnviroWatts is there to help. It lets you support energy produced from renewable sources inexpensively.

When you participate in EnviroWatts your money helps purchase energy produced from renewable sources for the program. Consider being a part of the EnviroWatts program. Help your cooperative invest in a renewable energy future.

To review the R&D projects, go to the Buckeye Power Renewables website.